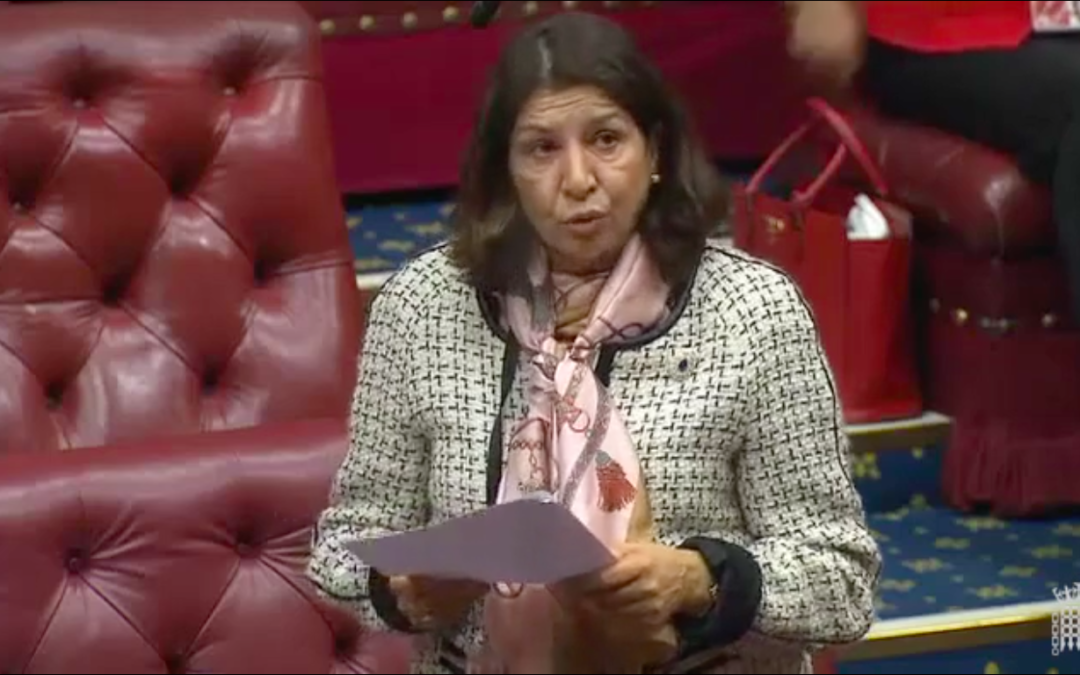 In the Lords debate on the Queen’s Speech last night, Baroness Manzoor made the case to the Government that they must support nutrition “if they want to meet their other global objectives”. In the speech, Manzoor demonstrated how nutrition is central to the achievement of the UK’s objectives regarding global education, nutrition, climate change – as well as security, trade and diplomacy.

The speech followed an intervention from Lord Collins, who urged the Government to “make a strong and early pledge [for Nutrition for Growth], ideally at the July springboard event” and asked for the “highest possible level of government attendance at the event”.

The Minister, Baroness Goldie, responded by saying, “we are working on the springboard event in the summer. I cannot commit to timing or pledge names of those who will attend, but I can assure noble Lords that nutrition is a high priority for DfID. We will build on the successful London summit of 2013 and strive to continue our global leadership on nutrition”.

My Lords, we heard in the gracious Speech about

“An Integrated Security, Defence and Foreign Policy Review … covering all aspects of international policy from defence to diplomacy and development”.

Like other noble Lords, I ask the Minister if she would elaborate on the expected timeline for this review. I also hope that she can reassure the House that a full and proper consultation process will be forthcoming.​

However, I would like to focus on the wider objectives of taking an integrated approach to foreign policy and development, because the right thing to do when scrutinising policy is to step back and consider the broader questions. What sort of world do we want to live in, and what should Britain’s role be within it? The response is surely this: a safe, prosperous, healthy world, and a well-respected Britain with a reliable network of security allies and trading partners. It is those objectives that should guide our international policy and that I will use throughout my speech.

Girls’ education and climate were the only development areas mentioned in the gracious Speech, so they are a clear priority for the Government. GAVI replenishment is an obvious priority for the Secretary of State, made clear by his ending preventable deaths strategy, as we have already heard. I congratulate the Government on their work in these areas. Education, climate and vaccines are key building blocks for creating a world in which we all want to live.

However, I am concerned that the Tokyo Nutrition for Growth summit is not being prioritised to the same extent. The summit is of such importance that the noble Lord, Lord Collins of Highbury, who is in his place, and I co-chair an APPG on it. Nutrition is the foundation of the health of every one of us. According to the WHO, malnutrition is the number one cause of illness worldwide and contributes to the deaths of almost half of all under-fives. Malnutrition causes irreversible physical and cognitive stunting. Thirty-three per cent of children across Africa are stunted due to malnutrition and are therefore unlikely to meet their full potential as adults.

Successive Conservative Governments have championed nutrition both domestically and abroad. The UK’s first ever national food strategy is being developed as we speak. It was David Cameron’s Government who hosted the first ever Nutrition for Growth summit back in 2013. The summit raised over £17 billion and stakeholders signed up to ambitious targets to end malnutrition. Sadly, we are behind on almost all targets, and at the end of this year there is no new UK funding for nutrition. I agree with the noble Lord, Lord Collins of Highbury, that the Tokyo summit is an opportunity to put that right. The Government must grasp it if they want to meet their other global objectives.

Let us take girls’ education, for example. It is no coincidence that girls are disproportionately affected by malnutrition and face more barriers to education than boys. Girls often eat least and last, despite their additional nutrition needs, particularly during menstruation. The health problems caused by malnutrition mean that, despite our best efforts, unless we tackle malnutrition, many girls will never attend school and those who do are unlikely to meet their potential.

The same is true for GAVI, as the efficacy of vaccines is massively reduced if the recipient is malnourished. Without stepping up efforts to end malnutrition, the Secretary of State cannot meet his commitment to end preventable deaths by 2030, as mentioned by the Minister.

Agriculture and food systems are extremely sensitive to climate change, as many noble Lords have indicated. At the same time, they contribute 20% to 30% of global greenhouse gas emissions. We must take a ​holistic approach, developing food and agriculture systems that are both climate-friendly and supportive of healthy, diverse diets.

When done right, all these things contribute to the UK’s wider foreign policy objectives. Just listen, for example, to the head of the UN World Food Programme recount conversations he had in Syria:

“My husband did not want to join Isis but we had no food, we had no choice.”

Likewise, on trade and diplomacy, less poverty equals more trade and greater security. Being an active member of the donor community improves Britain’s standing with other aid donors, such as America, the EU and Japan.

We need a foreign policy that is not about box ticking. If Britain is to spend large sums of money on girls’ education, vaccinations or climate change, let us not just tick the box, let us accelerate the impact of those interventions and look at them in the wider context of our vision for this world and Britain’s place in it.

I kindly request that the noble Lord—

I remind the noble Baroness of the advisory speaking time.

I am just coming to the end. Would a DfID Minister be happy to meet the APPG to look at the summit in Tokyo?